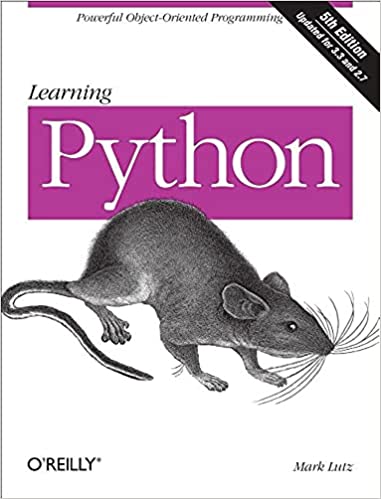 Mark Lutz is the global leader in Python training, author of the oldest and best-selling Python texts, and a pioneer in the Python community since 1992.

Mark Lutz is the author of the foundational and best-selling Python texts, a former trainer with two decades of experience teaching Python to newcomers, and one of the people responsible for the importance Python enjoys today.

About the author of "Learning Python"

Mark is the author of three books O'Reilly Learning Python, Programming Python, and Python Pocket Reference, all currently in fourth or fifth editions. He has been using and promoting Python since 1992, started writing Python books in 1995, and started teaching Python courses in 1997. At the end of 2018, Mark had: Taught 260 live, in-person Python courses to approximately 4,000 students, in a training career that spanned both continents and decades.

Wrote 14 Python books that have sold over 650,000 units, cover 11,000 published pages, cover Pythons 1.X to 3.X and have been translated into at least a dozen languages

Get a comprehensive, in-depth introduction to the core language of Python with this hands-on book. Based on author Mark Lutz's popular training course, this updated fifth edition will help you write high-quality, efficient code with Python. It's an ideal way to get started, whether you're new to programming or a professional developer versed in other languages.

Complete with helpful quizzes, exercises, and illustrations, this easy-to-follow, self-paced tutorial is an introduction to Python 2.7 and 3.3 - the latest releases in the 3.X and 2.X lines - in addition to all the other releases in common use today. You'll also learn some advanced language features that have recently become more common in Python code.

This chapter rounds out our in-depth tour of the core object types in Python by exploring the tuple, a collection of other objects that cannot be changed, and the file, an interface to external files on your computer. As you’ll see, the tuple is a relatively simple object that largely performs operations you’ve already learned about for strings and lists. The file object is a commonly used and full-featured tool for processing files on your computer. Because files are so pervasive in programming, the basic overview of files here is supplemented by larger examples in later chapters.

This chapter also concludes this part of the book by looking at properties common to all the core object types we’ve met—the notions of equality, comparisons, object copies, and so on. We’ll also briefly explore other object types in Python’s toolbox, including the None placeholder and the named tuple hybrid; as you’ll see, although we’ve covered all the primary built-in types, the object story in Python is broader than I’ve implied thus far. Finally, we’ll close this part of the book by taking a look at a set of common object type pitfalls and exploring some exercises that will allow you to experiment with the ideas you’ve learned.

Get a comprehensive, hands-on guide to the core Python language. Based on author Mark S. Lutz’s acclaimed training courses, this updated fifth edition helps you quickly write efficient, quality code with Python. Whether you’re new or experienced, this book provides an easy-to-follow, step-by-step approach to learning Python. You’ll start by writing your own scripts and then move on to create applications that can run on computers, smartphones, tablets, and embedded devices.

This new edition, redesigned for all Python learners in every Python domain, has been brought thoroughly updated with Python 3.3, and expanded substantially to match current practice in the Python community. Like its previous editions—and unlike so many others—this book applies to all Python releases in common use these days. Whether you’re using 3.X, or 2.X, or 1.5, you’ll find this new edition tailored specifically to your current and future requirements. Among other things, this edition includes coverage of Python 3.3’s namespace packages and Windows launcher; 2.7’s adoption of 3.X syntax such as set and dictionary comprehension; and the growing popularity of tools such as super() and descriptors. And of course, this edition has been expanded significantly to include coverage of all the latest Python developments, including 3.X’s string slicing and iteration enhancements, the growing importance of metaclasses, and the rise of the “new style” classes.

Author writes instructions for learning Python with minimal instruction for Mac OS X users. I capitalize Apple Macintosh to remind the Author Mark Luzt that there are more than just a few of us here trying to learn Python. I'll update this later as I progress through the book.

I am not familiar with python, but I am familiar with programming and computer science in general. I believe that the material presented in this book was meant to be an introduction to programming. I think that the author should have started with the very basic concepts and then built upon them. He should have explained things step by step rather than jumping into advanced topics without explaining how they work. For example, he should have explained what a variable is before introducing functions. Also, the author should have introduced objects earlier in the book.

This is a huge book for Python. It goes into every aspect of Python programming, from syntax to best practices. If you're looking to learn Python, this is a must read! This book is not only a great resource for beginners, but also an excellent reference for seasoned programmers who want to refresh their memory on the basics.

Be careful! This might be a great reference book on Python but it certainly is not the best place to start if you're new to programming. This book goes into great detail about the history of Python and even the smallest details about Python but it doesn't give you any practical advice on how to actually write code. I'm not sure what kind of target audience the author had in his head when he wrote this book. If he is so experienced in teaching Python, why did he make it so difficult for people who are just getting started?

Speaking as someone who has been writing code professionally for years, I can see how someone totally new to Python (and coding, in general) might not like the style of this book, especially given the title. I'll admit the cover could be construed as somewhat misleading, but I'll say that I've learned so much about Python I didn't know and honestly believe I'd struggle to find online. It's the most comprehensive guide to Python I've seen, and if you have any experience with basic programming concepts, this book should be your bible.